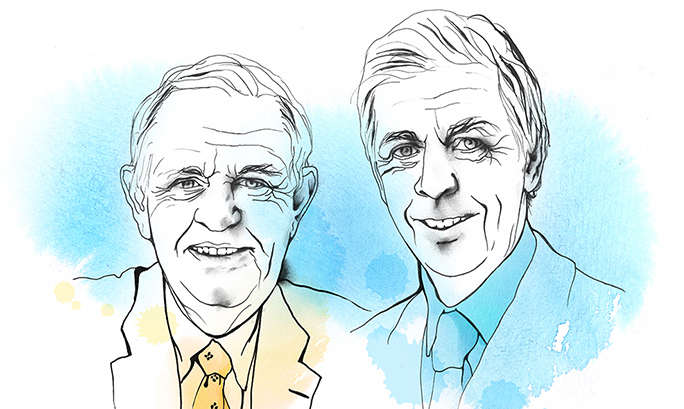 When Robert and Jonas quit their jobs at successful, well-established companies 50 years ago, people thought they were crazy. But they had a big idea, and even bigger ambition. And with loads of self-belief and unwavering positivity, they have made Oriflame one of the largest beauty companies in the world.

When asked where they got their winning mentality from, the answer is obvious – they got it from each other. Being very competitive since childhood, they always played a lot of sports and arranged contests at home. According to their sister, they even timed themselves running to school. It never ended. And this competitiveness has played a huge role in Oriflame’s success over the years.

“We were so used to fighting for what we believed in. It was imprinted in our DNA. But also in our culture and our kind of business – it was so passionate.” Robert says.

That fighting spirit becomes apparent when you hear how they’ve dealt with challenges over the years. It’s as if they don’t recognise problems – but only see opportunities. Opportunities to change things and make them better.

“Never ever give up. There is always a better way somewhere. Entrepreneurship is when you’ve got your back to the wall but manage to find a way out.” Jonas says.

This winning mentality obviously rubbed off, since everyone who joined Oriflame over the years shared the same great energy and values. They never gave up either. Robert and Jonas took particular care when hiring Country Managers. They knew that choosing like-minded people was crucial to keeping the special Oriflame culture alive.

And of course, the same applies to the sales force. Oriflame quickly became, and still is, a magnet for those who strive to make a positive change in their life, and also the lives of everyone around them. Those people have become symbols of success within Oriflame – symbols of the amazing things that can happen when people join.

Jonas looks back on these earlier days with huge warmth and satisfaction:
“It was so incredibly exciting just meeting all these people. Many said they lacked self-confidence and couldn’t talk to other people, and we said: “You’ll be surprised. When I see you in a year’s time you will be a Leader – standing on the stage”. And true enough, there they were.”

Witnessing this kind of positive change in peoples’ lives is what makes Jonas and Robert feel most proud of all.

"What really makes us happy is the lives we’ve helped change. It’s a beautiful feeling.” Robert says. “This business opportunity has enabled so many people to fulfil their dreams – they’ve put their children through school, had the chance to become entrepreneurs and to grow as individuals."

They believe that selling dreams and opportunity is incredibly inspiring – something that brings meaning to life. They also strongly believed that all good things should be accessible to everyone – not to the privileged few. Put simply, Oriflame offers everyone the opportunity to fulfil their dreams and change their lives – to look, feel and live better.

“Could you ever imagine that we would make such a difference to so many people?” Robert asks his older brother, Jonas.

And that difference it’s not just monetary. The brothers realised quickly that Consultants enjoyed growing as people through their new jobs. They also noticed that the higher Consultants climbed on the Oriflame Career Ladder, the more they felt part of a warm and supportive family.

“Oriflame is a family business with family values”

Those family values are at the very core of the business. Being brothers had an enormous effect on this of course. It came naturally. While competitors might try to emulate a family feeling, it’s impossible to recreate the real thing. And Robert and Jonas saw the positive effect this had on attracting people to their sales force. So much so, that sometimes whole families joined the business.

But, however big the company has gotten, success is in the details. The fleeting moments of kindness between brothers, their natural ability to communicate in a very “down-to-earth” way, and how they always deal with people in a very positive, understanding way.

It’s these small, yet extremely powerful characteristics that have driven Oriflame for the last 50 years. And they will continue to drive Oriflame for many more to come.

The 5 Most Inspiring Women For Womens Day